Honoring Our Veterans: Appreciating Our History 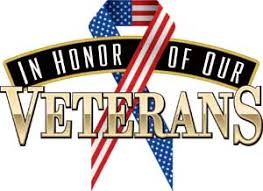 Have you taken time on in the past few days to think about our nation’s veterans? About their past and present service to protect not only our nation, but many people around the world from tyranny and despotism. Have you thanked a military person for watching your back, standing in the gap for you?

Veterans Day honors all who have served or are currently serving in the various branches of our military – Army, Navy, Marines, Air Force and National Guard. Veterans Day is largely intended to thank LIVING veterans for their service, to acknowledge that their contributions to our national security are appreciated, and to underscore the fact that all those who serve – not only those who have died – have sacrificed and done their duty.

While studying a chapter in the New Testament book of 1 Corinthians, I did some research on the history of the city of Corinth. It was at one time a very important Greek City. When Greece was taken over by the Romans in 146 BC, the residents of Corinth were killed or deported. About 100 years later Corinth was colonized by Roman “freedmen”.  Later Greece came under the power of the Ottoman Empire and finally became independent again in 1832. Greece and the city of Corinth have survived, but not without a turbulent history.

As I read this brief history of Corinth and of Greece, I wondered how many contemporary Greeks are aware of their country’s history.

Then I wondered: ”How many Americans are aware of the history of the United States of America and its on-going fight for freedom?  First, its fight for independence from Great Britain, culminating in the Declaration of Independence, signed in 1776? How about the war between the North and the South (the Union and the Confederacy), which established the “United States” of America?

What do current generations know of our stand against the spread of Nazism across Europe, to stop Hitler’s dream of dominating the world, including the USA? Or the role of the U. S. in stopping the Japanese from attaining their goal of international rule as the imperial power of the world? Not many of the veterans who fought in those wars are around to remind us that our freedom has not been free.

How many of our uneducated and under-educated youth, who have never taken a U.S. history course, are aware of the historic development of our great nation? How many of the aliens and immigrants (legal and illegal) -many who don’t even speak English – have knowledge of the history of the USA? Yet many of them have exercised the right to vote in our national elections.

As I read the Old Testament books, I am again aware of how repeatedly the prophets in Israel recalled to the people their history; reminding them that God had set them apart for Himself.  And how in the New Testament, Christians are reminded of the history of ancient Judaism, out of which came our Savior, the Lord Jesus.

When we have no sense of our nation’s past, personal values can become irrationally selfish, as in the expectation of entitlements in exchange for support of a political candidate. This was demonstrated in the chants by the college students gathered outside the White House on our last presidential election night – as they shouted such remarks as “Karl Marx! Karl Marx!”, “abortion rights”, “ birth control”, “cell phones”, and “socialism”.

When our wounded and disabled vets, who have fought for the continuation of freedoms for U. S. citizens and others around the world, cannot even find jobs to support their families, I find such immature expectations of entitlements mentioned in the preceeding paragraph, reprehensible.

The expectation to get for free what past generations paid for with their hard-earned money makes me very nervous for the future of our nation. The guarantee of “life, liberty and the pursuit of happiness” is not a guarantee for free birth control, free abortions, free cell phones, or even free education.

Without a sense of personal identity with our national history, our young people can easily be manipulated and misdirected by whoever offers to meet their “felt needs”. They don’t yet understand that you don’t get something for nothing.

I can’t help but wonder if there will be young adults willing to join the U. S. military in the near future, or to pursue public service jobs, or to become teachers and doctors (I feel sure there will be those who become lawyers).

Will there be any U. S. military veterans in years to come? Or will we be absorbed by another nation, diabolically guided by another Hitler, Stalin or Marx who promises a loaf of bread and a chicken in every pot, for free? A sharing of everything, by all, for the common good?

For now, we still have an Army, a Navy, the Air Force, the Marines, and the Coast Guard policing hot spots around the world where individual freedom is swallowed up by top-down mandates; ideologies and cultures in which domination by “the few” dictates to the masses such things as, who will receive an education and who will not (ie. women in strict Islamic cultures), what religion can be followed and which cannot, and which personal opinions can be freely expressed without threat of imprisonment or death.

I pray there will be men and women in the USA whose innate sense of service, out of grateful hearts and concern for preserving personal freedoms, will overcome self-preservtion and give their lives for people who may not understand the preciousness of such a gift.

The freedoms we still enjoy here in the USA have a price tag.

Thank you, veterans of every age, color, rank, sex, and duration of service, for your part in paying the price in the battle to maintain our national freedoms, and to secure those freedoms for others around the world. We salute you.

Posted in Follow Me, In the News, My Journey, Political